The COVID-19 pandemic has brought many subjects to the forefront: our reliance on oil, manufacturing in China, the need for digital dollars, the frailty of our global supply chain, and our lack of preparation to deal with the outbreak.

However, perhaps the strangest topic online and the most unavoidable has been the conspiracy theory chasing Bill Gates and his foundation’s efforts to produce a vaccine. The accusations range from him directly being the cause of the pandemic, to being the head of an Illuminati like circular cabal bent on controlling the world through microchips, and now an insidious plan to depopulate the planet of billions of people. 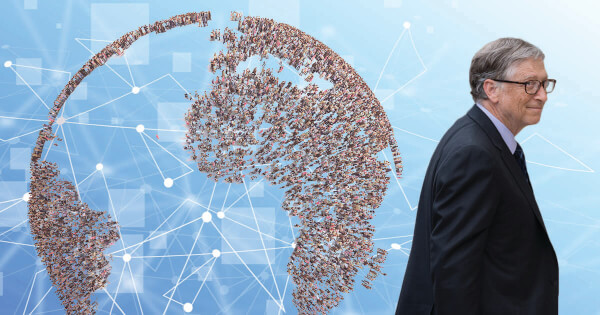 Where we Came In

We are a blockchain news site, while we absolutely love discussing technologies that may appear to border on fantasy, it has never been our intention to dive into the realm of conspiracy and allegations. However, while this conspiracy began for us as a simple write up on a cutting-edge Microsoft crypto mining patent, the story was bigger to some people than we ever could have imagined and has now taken on a life of its own.

In an effort to put this story to bed once and for all, as far as we are concerned, we have decided to look a little more closely at the allegations and perhaps shed some light, for some, on why they may be getting carried away.

In March 2020, Microsoft filed a patent with the World Intellectual Property Organization (WIPO) for a new system that proposes using sensors, not microchips, to detect and calculate the amount of energy and time spent on a pre-determined activity, like engaging with an advertisement. The sensors apparently are capable of gauging both physical and brain activity and convert that sum into data which can be used by computers to solve computational problems and create new blocks.

What we did not really pay attention to, at the time, was the peculiar patent number of the Microsoft technology – WO/2020/060606. This number, however, did not slip past the Oscar-winning Russian director, Nikita Mikhalkov. A devout Christian, Mikhalkov immediately noticed that the last few numbers of the patent seemed to include the devil’s number, “666” in the application.

Appearing on Russian TV, Mikhalkov said, “The 060606 part is somewhat alarming. You probably understand this, right? Is this a coincidence or an intentional selection of such a symbol, which in the Apocalypse of John is called the ‘number of the beast’ – the 666.”

The Oscar-winning director is adamant that the went on to name Herman Graf, the Head of Russian bank Sberbank, as a co-conspirator, and his arguments have been convincing enough for former Tennis champion and now Russian politician Marat Safin who has shown public support for the director’s theory.

Perhaps unknown to both Mikhalkov and Safin, is that patent filing numbers are simply generated according to the guidelines of the World Intellectual Property Organisation. And both of these men do not ever contend with Microsoft’s US patent number which was published in the United States as US20200097951. We assume it is because there are no numbers linked to biblical prophecies or ‘judgment day’ in this filing.

The first numbers ‘2020’ simply represent the year, and the rest is simply the order it was filed in. Not too much to this one.

Plandemic and the Anti-Vaxxer Virologist

A week ago, a clip from a soon to be released documentary called ‘Plandemic’ went viral on YouTube before being removed. The clip featured a disgraced virologist named Dr. Judy Mikovits accusing a sinister corporate-controlled “circular cabal” led by Bill Gates himself, of creating the coronavirus pandemic.

Mikovits is adamant that this group she refers to as a “circular cabal” is led by Microsoft Founder turned philanthropist Bill Gates and she even goes on to accuse Dr. Anthony Fauci, the Director of the National Institute of Allergy and Infectious Diseases of burying her research which allegedly proved that vaccines weaken people’s immune systems and made them more vulnerable to the coronavirus.

In the viral clip from Plandemic, Mikovits insists that her research was buried and she even goes as far as saying that wearing a mask actually activates the coronavirus. She alleges that Dr. Fauci, who is the face of the Trump administration’s outbreak containment efforts, has censored her warnings to the public. Unfortunately, a little fuel was added to this fire when Trump himself began to publicly question the origins and spread of COVID-19, suggesting it was man-made.

Prior to the clip of Plandemic being released, Mikovits had already authored and published a book entitled the ‘Plague of Corruption’ which frames herself as the brave whistleblower being held at bay by an Illuminati-like ‘deep state’ organization.

Mikovits has received a lot of support unfortunately due to her training as a virologist. But in her excuses regarding her lack of legitimate support, she and her following have consistently failed to mention that her research has never been successfully replicated in other laboratories, meaning it has failed the scientific research standard of peer review. This is basically the reason why anyone’s research would be disregarded, and another point many do not want to contend with is that Mikovits does appear to have a notorious anti-vaxxer history and her research appears to be driven by her agenda allowing her to draw the conclusions she would like to see. If this were not the case, her research would have held up. But it didn’t. Mikovits down.

Italy Calls for the Arrest of Bill Gates

The most recent in the line of allegations came less than a week ago, this time by Italian politician Anna Cunial who took to the floor to call for the arrest of Bill Gates as she believes he is on a mission to depopulate the world by up to 15%.

Cunial alleges that Gates has been working on depopulation and dictatorial control plans on global politics, aiming to obtain control over agriculture, technology, and energy. Cunial allegations appear to fit in with Mikovits’ own accusations, alluding to a powerful deep-state government that Gates himself controls.

She subscribes to the claim circulating on social media, that Gates owns the “patent” for the SARS-CoV2, a virus that wasn’t even discovered until January 2020. The theory goes that this entire pandemic is just to create a need for a vaccine from which Gates will subsequently profit. Cunial point to  Event 201 which took place in Davos Switzerland, and officially served as a simulation for the prevention and control of such a pandemic. She quotes Bill Gates from the day of the simulation, who she claims said, “If we do a good job on vaccines, health, and reproduction, we can reduce the world population by 10-15%, only a genocide can save the world.”

Cunial goes on to put an unsupported, by anyone of substance, spin on some of the Gates Foundation’s achievements, “With his vaccines, Gates managed to sterilize millions of women in Africa. Gates caused a polio epidemic that paralyzed 500,000 children in India, and still, today with the DPT vaccines, Gates causes more death than the disease itself.”

First, let’s dispel the myth that Italy is out for the arrest of Gates. No, the Italian authorities have not been as compelled as the red-eyed Youtube users and underground chat scene to take up arms against the philanthropist.

While Cunial’s argument was lengthy and quite articulate on the Italian parliament floor, and she did cover all her bases mentioning everything from the Bilderberg Group to Monsanto GMOs. Cunial’s argument seemed to really fall down when she kept returning to Gates’ motivations as simply being to control-everything. She is especially perturbed with Gates’ ability to have predicted the pandemic after only spending a decade speaking to the most intelligent minds the world has to offer on the subject.

Gates’s most significant and obvious flaw has been his long campaign to prevent these diseases and to continue to pursue vaccines for diseases that really should no longer exist and have a larger impact on the third world and developing nations.

The reality at this point is that Cunial has never seen a vaccine that she liked and so far she has not published or provided any hard evidence for her accusations, which may sound powerful when spoken but falls apart quite quickly when any actual research goes into them.

She claims money and control to be his main motivations, “The Italian contribution to the International Alliance against the coronavirus will be 140 million Euros of which 120 million Euros will be given to Gavi Alliance the no-profit created by the Gates Foundation. This is just part of the 7.4 billion funds by the EU to find a vaccine against coronavirus which will be used.”

Again lets layout these motivations for the alleged evil of Bill Gates logically, Cunial is saying Gates is pursuing money and control? Unless you have been living under a rock since the 1990s, you are probably aware that Gates is the founder of a little company called Microsoft and this has made him incredibly rich. In fact, rich beyond our, and definitely Cunial’s narrow comprehension. 120 million Euros is definitely a lot of money, but not really to someone who has over 100 Billion USD and change and is still earning exponentially. Gates and his family for generation upon generations will never ever be in need of money.

Additionally, there are a lot of easier ways to make money than selling vaccines, which have to go through very extensive testing and regulatory requirements. Vaccines also do not even have anything close to the profit margins of other non-essential medications like a Viagra or even a basic health supplement.

As far as global control goes, again perhaps Cunial has not visited an actual office in the last 30 years, but Microsoft’s technology is more than likely the glue that holds most offices together. Gates does not need to infiltrate us with his technology, we are already on board.